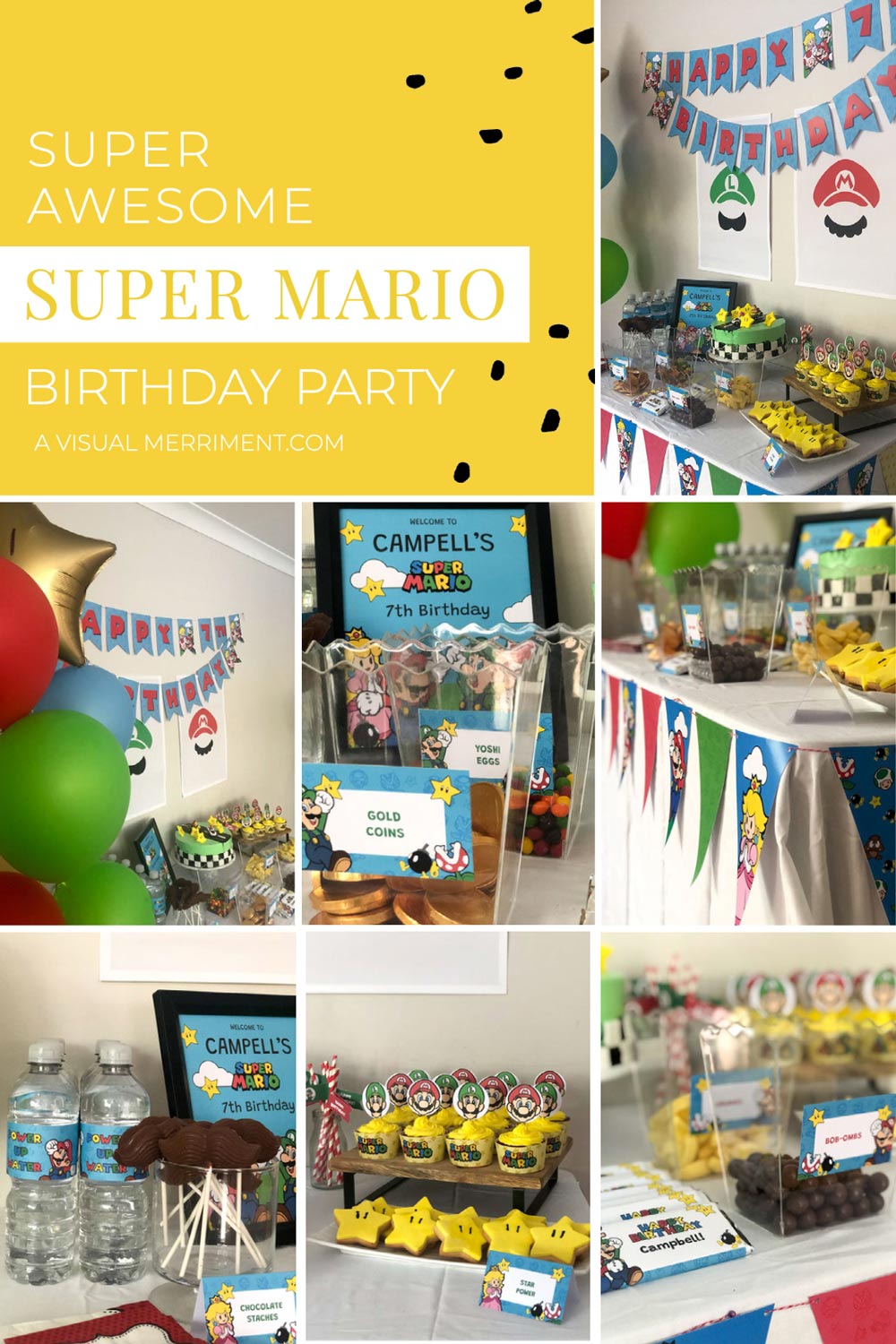 In need of some Mario Bros party ideas?! I've finally got the scoop on how I put together my son's Super Mario Birthday Party. Now I'm all about easy parties! The printables really made the Mario theme so easy to bring together. I had a few hiccups (can you spot them in the photos?!)

My son turned 7 in November (and it's now June!). So this article has been a long time coming. I'm fortunate enough to have been able to host the party at my Mum's house, making the party planning a little less stressful. I was a little worried about spending way too much time cutting printables but I had a couple of handy tools so it really wasn't an issue.

After Campbell requested a Super Mario Birthday party I decided to make coordinating printables to make it easier and more memorable for him. I sell similar items over in my Etsy store. Of course like usual, I also have a fun free party game for you to download too.

I had two sets of Mario bunting printed at my local Officeworks as well as the cute Mario and Luigi posters in A2 size. I love the cute little hats and moustaches! Using my paper trimmer I cut the bunting out. Using a circular handheld paper punch from my old scrapbook days, I quickly and easily punched holes into the top of the bunting. I then used baker's twine to hang them.

I placed a table cloth over the buffet table and used sewing pins to attach the triangle Super Mario bunting around the edge of the table. You can print as many pages as you need to make your bunting longer. What's funny is that my mum was horrified when I pulled out a table cloth and put it on without ironing it. Naturally, I laughed and said… it won't show in photos. And now it's all that I can see! Mums are always right, aren't they?!

Okay, so time for my first hiccup… did you notice in the pictures that I spell my son's name differently in some of the printables?! Yes, that's right, I misspelt my son's name on the table welcome sign (facepalm). So if you find yourself editing party printables, be sure you spell your child's name correctly, ha ha.

Each year I buy the number of helium balloons based on the kid's age. This year I bought 7, we took photos of Campbell with them as we do each year. And then placed them by the buffet table. One of the balloons was a gold foil star that I drew two eyes on to look like the Super Star graphic from the game.

It has taken quite a few years of children's parties to grasp the concept of buying less food! But I think I'm almost there… almost.

A week before the party I made cupcakes and froze them to keep them fresh. The day before the party I iced them with yellow icing. Can you tell I'm not much of a cook or a cake decorator? But it's okay since the cupcake wrappers and toppers tend to detract from that! I did have to cut out the cupcake wrappers with scissors and that was the most laborious thing I'd say. The circular cupcake toppers were a 2″ circle so I used my paper punch for that one. I placed a toothpick between two Mario or Luigi heads to insert them into the cupcakes. I have a quick video on how I assemble my cupcake toppers here.

The weekend before the party I also made some yummy sugar cookies and used a star cookie cutter to cut the shape. The day before the party they were easy enough to decorate with ready rolled fondant icing (did I say I'm all about time-saving here?!). Then a couple of eyes on each one for some Super Mario Star Power – they were a hit!

And my second hiccup of our Super Mario Birthday party… the cake. This is a photo of it before it turned pear-shaped. You'll see in the other pictures that it melted a little. This was my first attempt at putting a little more effort into cake decorating. But of course, at my level where things are simplified and easy to create! So I ordered a cake with green icing and then used fondant to embellish it. The stars were easy enough to make with a cookie cutter. I then placed toothpicks in them so they would stand up on the cake. The Donkey Kong and Super Mario cars made the cake and my son was super happy about getting two new cars too!

I had some leftover red and white paper straws from another party that I used to add the Mario and Luigi straw flags to. Once I cut the flags out I used a double-sided tape applicator to secure the flags to the straws. I also have a quick video on how I assemble my straw flags if you want to check that one out!

Some of the food required a folded food tent label and others I stuck to the party containers. I simply cut the backing of the card in half and attached using double-sided tape. I wanted to come up with some fun Mario Brothers food ideas. So this is a complete list of what I had:

Since it was held around lunchtime we also had a heap of hot food options to fill bellies with a little more than just sugar!

A super finish to our Super Mario Birthday Party

Notice how I refer to it as “our” party?! I think I get to do that given the effort put into it, right?!

I mentioned that Campbell's Birthday was in November, well his party actually fell on Halloween. Of course, the boys were happy to take the opportunity to dress up as Mario and Luigi for trick or treating! These costumes were so easy to pull together, I just had to make sure I had the correct colour shirts with coordinating hats.

My mum bought the suspenders from Spotlight for me. I originally sent her in to buy some plain blue ones but I got a phone call from her asking if I wanted the “blingy sequin” ones. Of course, I did! Geez, my mum knows me well. I cut the L and M hat badges out of felt and used a spray adhesive to attach to their hats. The kids loved them and still wear them!

I hope you enjoyed the article and it gave you some great Mario Bros party ideas! I don't know about you but I get so overwhelmed thinking about everything that has to come together. Each time I throw a party, I challenge myself to try something new. Like upping my cake decorating or making things ahead of time so I can put more effort into decorating them. Those star cookies were a first for me and the icing was a little thick but everyone still loved them.

Sometimes just getting everything all together is half the battle, isn't it? Do you have a favourite themed party that you've put together? Tag me @avisualmerriment on Instagram or Facebook, I'd love to see them!

DON'T MISS OUT!
NEED INSPO FOR YOUR NEXT PARTY?
Be the first to know about new articles just like this one!
PLUS ACCESS TO PRINTABLES FOR YOUR HOME, KIDS + PARTIES
YOURS FOR FREE!
LETS DO THIS!
We won't share your info with third party marketers. View our Privacy Policy.

NEED INSPO FOR YOUR NEXT PARTY?
Be the first to know about new articles just like this one!
PLUS ACCESS TO PRINTABLES FOR YOUR HOME, KIDS + PARTIES
YOURS FOR FREE!
LETS DO THIS!
We won't share your info with third party marketers. View our Privacy Policy.

Hello! I’m Lauren, a graphic designer, blogger and mother here at A Visual Merriment. I have a passion for interiors, design, crafts and making parties come to life! 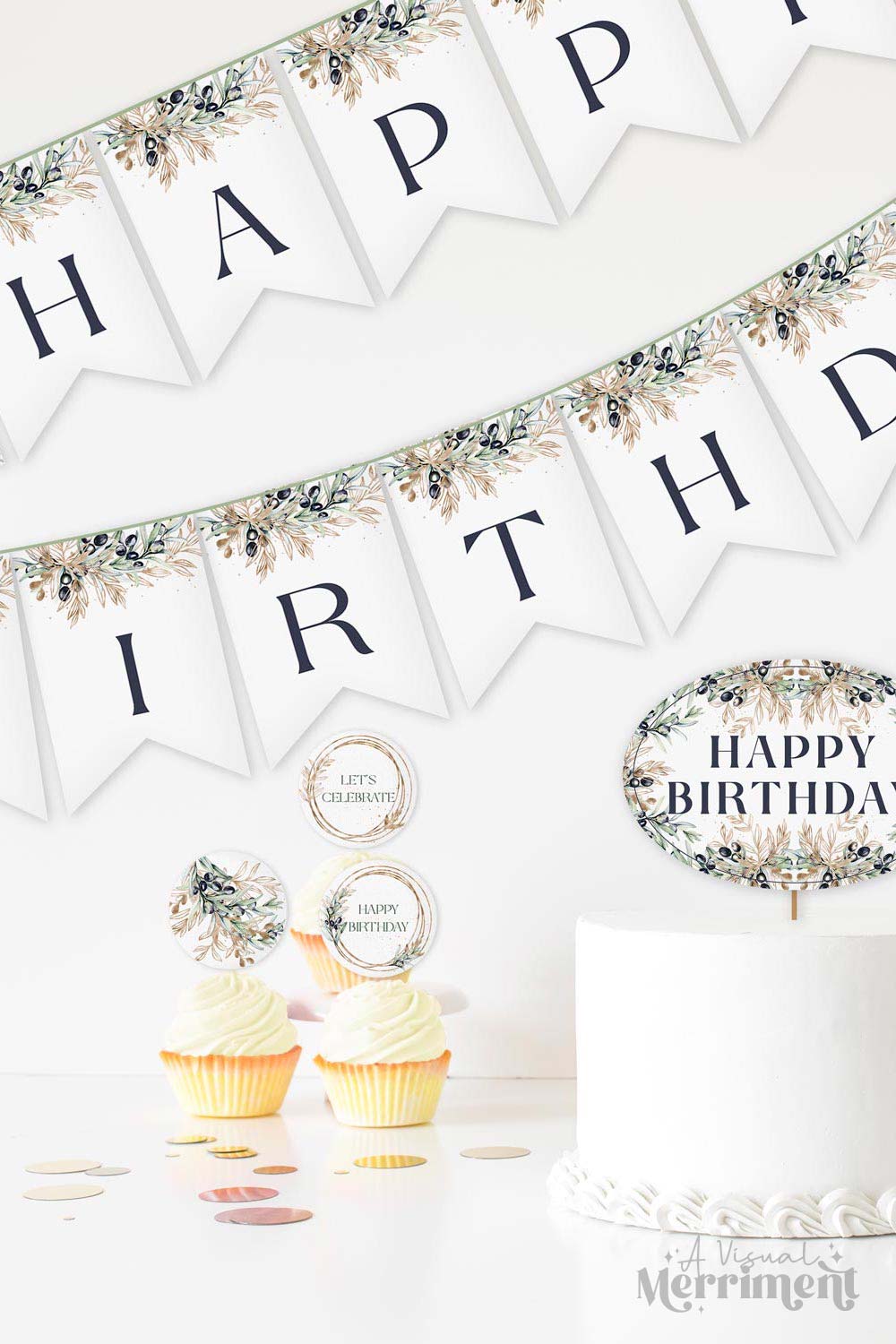 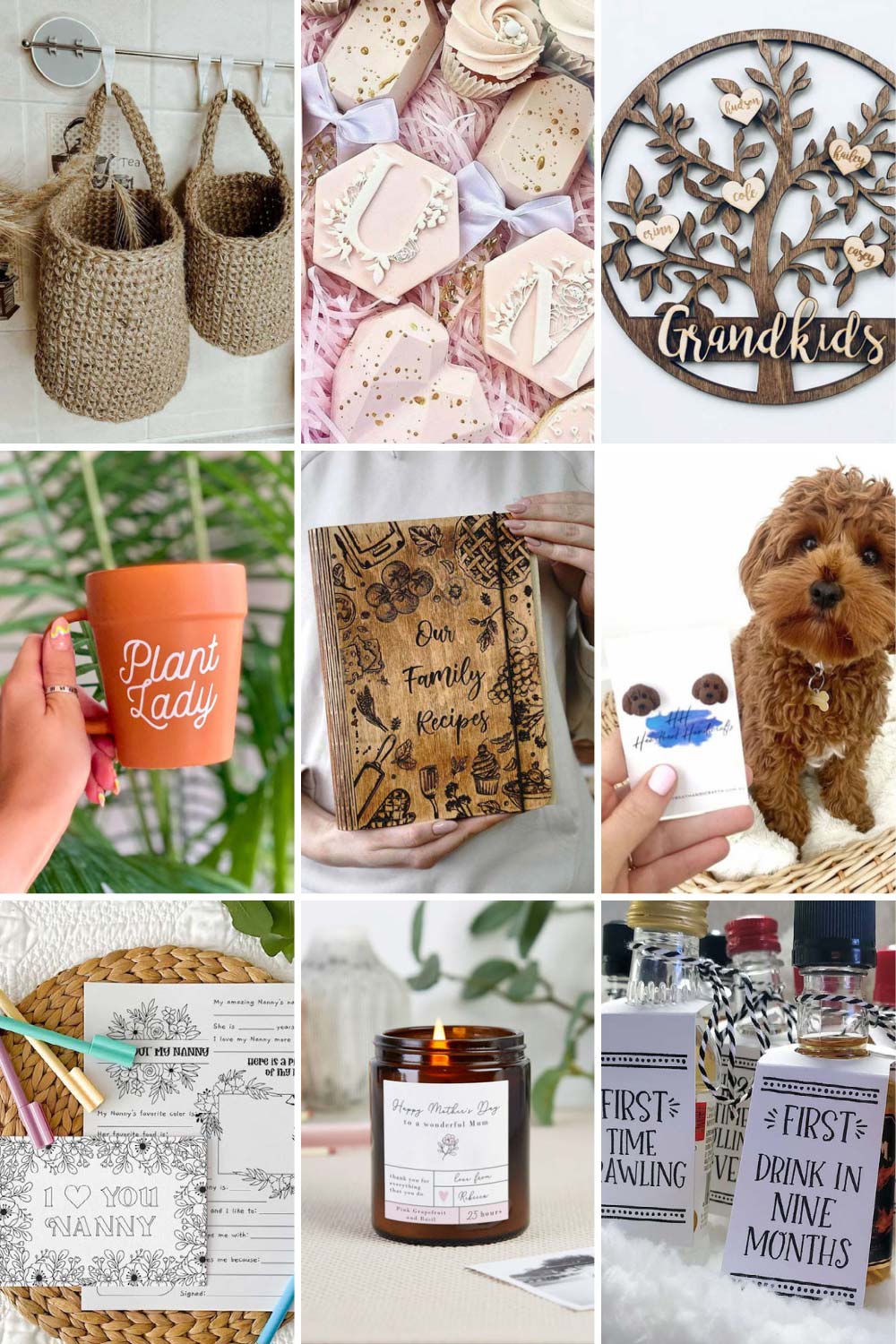 WANT FREE PRINTABLES FROM THE VIP MEMBER'S LIBRARY?
SIGN ME UP!

I'm a graphic designer, aspiring entrepreneur, avid DIY-er and solo mama. I love to inspire confidence in others to create and fill their lives (and homes) with merriment using their own uniquely awesome personality. Hang out with me for crafts, decorating and plenty of celebrations.

I choo choo chooooose you!! 😂 When thinking of

This week on the blog 👉Do you have a train-obse

Have you seen the latest free printable on the blo

Hey! Hi, hello you... over there in all your aweso

Okay... this one is a bit of a long one. But defin